Don’t think of Florida as only a fly-in kind of place. The Florida Panhandle offers a drive-able option for many. Depending on traffic conditions, distance and driving stamina, you could be there in a day.

We pointed our motor home toward the Panhandle for spring break, stopping for a few hours to tour the U.S. Space & Rocket Center in Huntsville, Alabama, home to the largest space museum in the world. There, you’ll experience retired space shuttles, a tour of a space station replica, a 3D movie that simulates a space trip, and more.

Although we took a break, Destin really isn’t a bad drive from West Michigan. It’s always refreshing to watch the trees growing greener and the blossoms blooming on any spring trip south.

We made the Gulfarium in Fort Walton Beach our first stop in the Panhandle. It’s a must-see, especially if you have kids. The eco-friendly, conservation/rehabilitation center houses sea animals too vulnerable to return to the wild.

There’s a petting area where the youngsters can touch sea stars (formerly known as starfish in my day) and crabs, as well as watch delightfully entertaining(and educational) sea lion and dolphin shows.

For an additional fee, you can experience close-up encounter with resident animals, including feeding, petting and even training.

Our 7-year-old daughter raised her arms during a short, 5-minute encounter, and a dolphin jumped at her command. It’s an amazing experience for all ages. 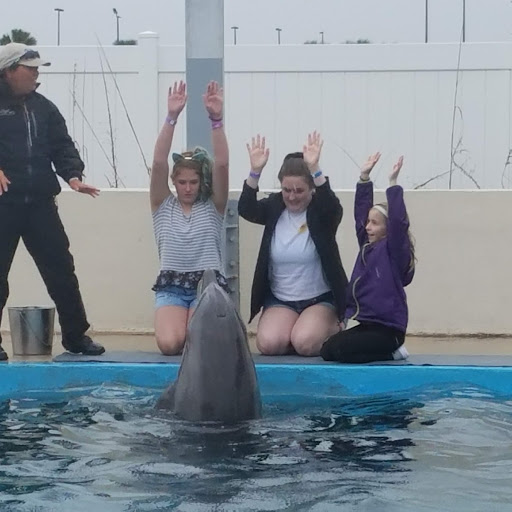 Get up close and personal with dolphins. (Marie Havenga| Travel Beat Magazine)

While in Destin, don’t forget the main attraction – the beach. That’s where we spent our first full day. Unlike the yellowish, squeaking sands of Grand Haven, Destin’s sand is albino, as in pure white. It’s pure beauty, and feels less coarse and gritty than its Lake Michigan coastline counterpart.

Not that one is better than the other, but felt good to have a different kind of “beach” experience than the one we experience here in Grand Haven.

The Southern Star serves up an engaging dolphin cruise, which includes a seagull stint, and the opportunity to feed them by hand. Kids get free snacks, and a chance to don the captain’s hat and pilot the 80-foot vessel. Dolphins were plentiful and the crew was helpful in pointing them out.

Of the hundreds of cruises they offer each year, only six in the last year proved dolphin-less. No worries, though. If you don’t spot dolphins on your voyage, you’ll get to ride again for free. 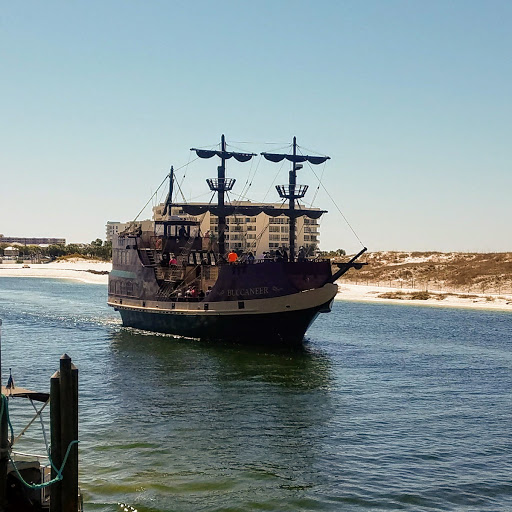 Adults can kick back, relax and enjoy the picturesque scenery, knowing the kiddos are being watched and entertained during the cruise.

If you prefer venturing out on your own instead of joining a boat full of people, contact Luther’s Pontoon, Waverunner and Kayak rentals on the Destin Harbor.

We spent three hours exploring the area on a 24-foot pontoon. It’s a quiet trip with the 4-cycle outboard. We were able to experience the rocky waves of the inlet from the Gulf of Mexico, the quieter areas of the inland residential neighborhoods and the popular destination of Crab Island, where shallow turquoise waters entice boaters to drop anchor and swim.

Don’t be surprised if dolphins swim alongside your vessel, within arm’s reach. A treasured experience, for sure.

Looking for night life after a day on the water? Particularly family-friendly night life? Check out the Maximum Magic Show by Noah and Heather at the HarborWalk Theater. It’s a blend of humor, illusion, audience engagement and “wow, that time went fast” kind of experience.

If you’re up for an even later night life, the Noah & Heather show is followed by a hilarious hypnosis show by Terry Stokes, who guides his volunteers through acts they wouldn’t possibly perform on their own.

Questioning the authenticity of the act, I interviewed several family members of volunteers who had been on stage. All said they were shocked at the way their loved one acted, and confirmed nothing had been faked or set up ahead of time.

Gotta believe it, since my daughter was one of the initial volunteers, but was one of several sent back to her seat who were deemed not easily influenced/hypnotizable. No surprise, I suppose. Like many kids, she sometimes has a hard time listening to suggestions from us, too.

If you’re catching one of the evening shows along the Destin Harbor Boardwalk, wouldn’t hurt to head down early. There’s plenty to do and experience there, including local seafood dining options, sipping family-friendly drinks from watermelons, pineapples or coconuts, letting the kiddos spin in a 6-foot diameter inflated “bubble” across a small pool or flying high on a zip line along the waterfront. 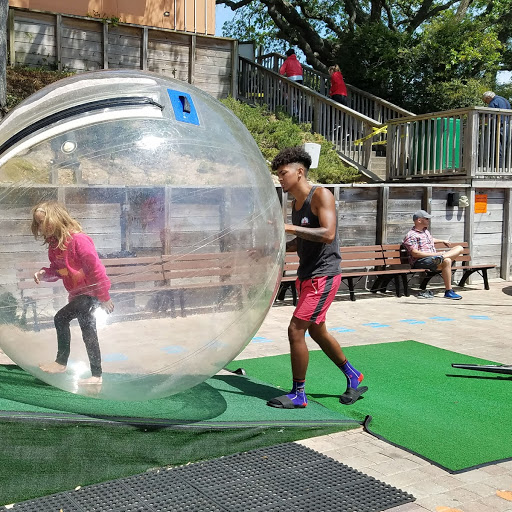 If all else fails in the entertainment category, souvenir shops abound.

But chances are, what you bring home from Destination Destin won’t be trinkets and souvenirs – they’ll be memories and attractions that will keep you coming back every few years.

If you do decide to fly, and not drive, the Fort Walton/Destin Airport is easy-in, easy-out, and super tourist friendly.

Due to a family medical emergency back in Grand Haven, I had to fly out of Fort Walton/Destin and fly back, in a 24-hour period. Both experiences were amazing, customer service every airport should strive for.